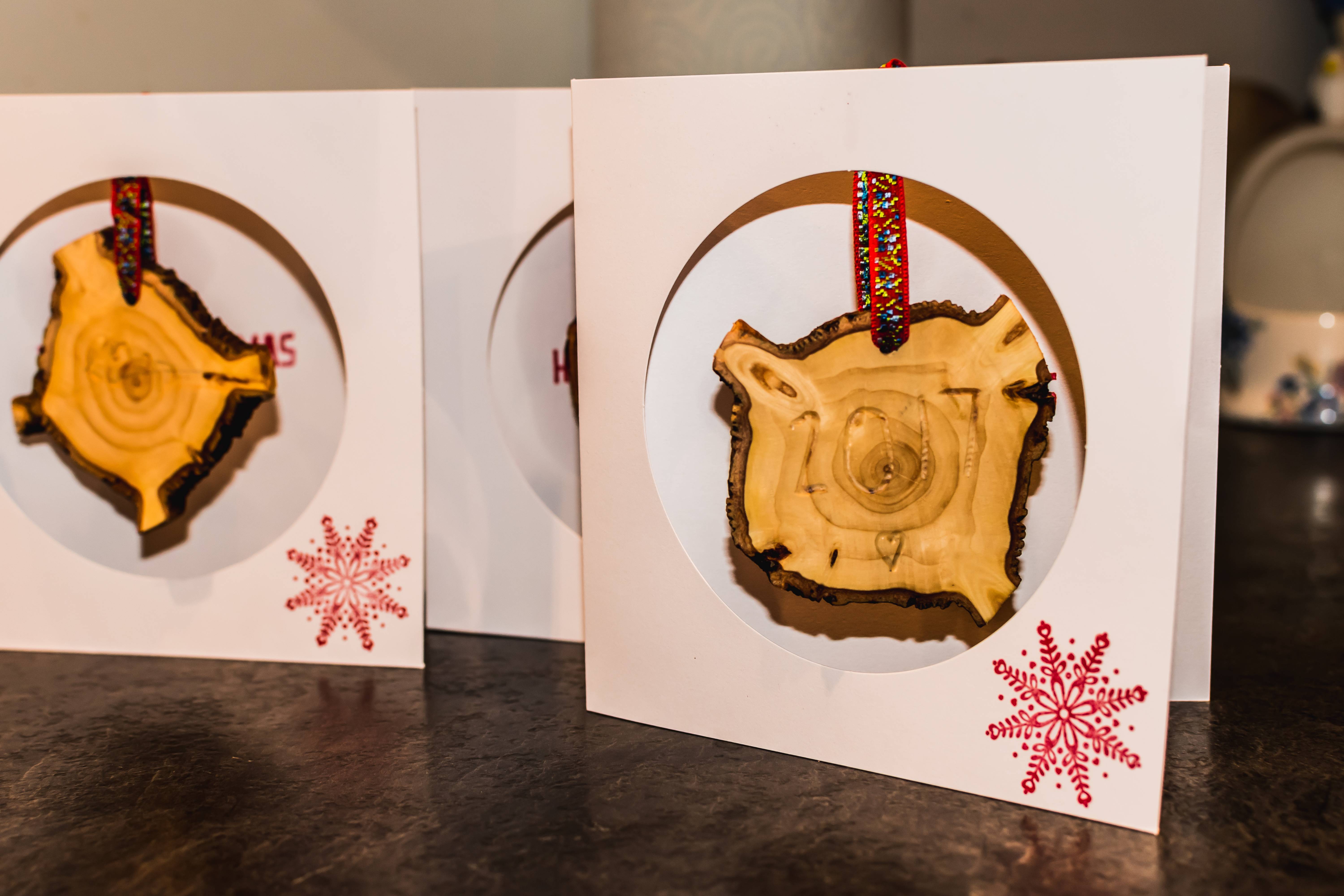 As is tradition with build guides, here is the end product! I’ve always preferred to make cards myself. Bought cards, while convenient, don’t always have the same amount of weight when compared to something you’ve made yourself. I’m also sure when I receive something handmade, I appreciate it just that bit more. Making your own cards also normally means saving money. Unfortunately, I have a poor grasp of economics. Rather than buying a pack of Hallmark Cards I decided to make my own, which required tools. Tools cost money. Much more money than a pack of expensive Hallmark cards. But hey, it was fun, and the cards have much more meaning. Plus I now have more tools. 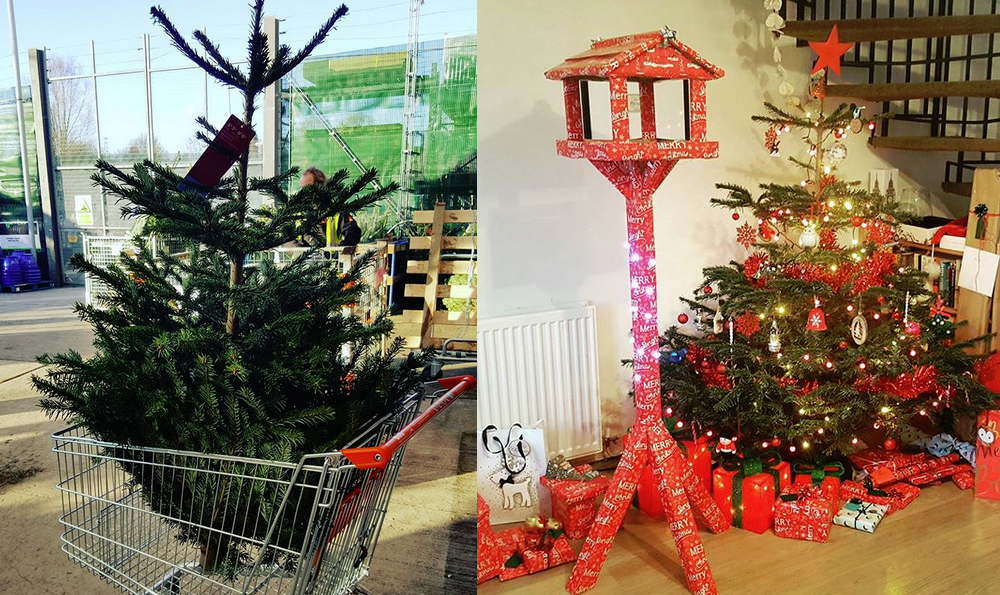 The story starts in 2016 with last years Christmas tree. It was an amazing tree. Other than the whole “non-drop” aspect, which was less “non-drop” and more drops than a Knife Party track. It was sad to see it go, at-least go to a rubbish tip. So Instead of throwing it away I saved the main trunk of the tree with hopes of doing something with it later on in the year. 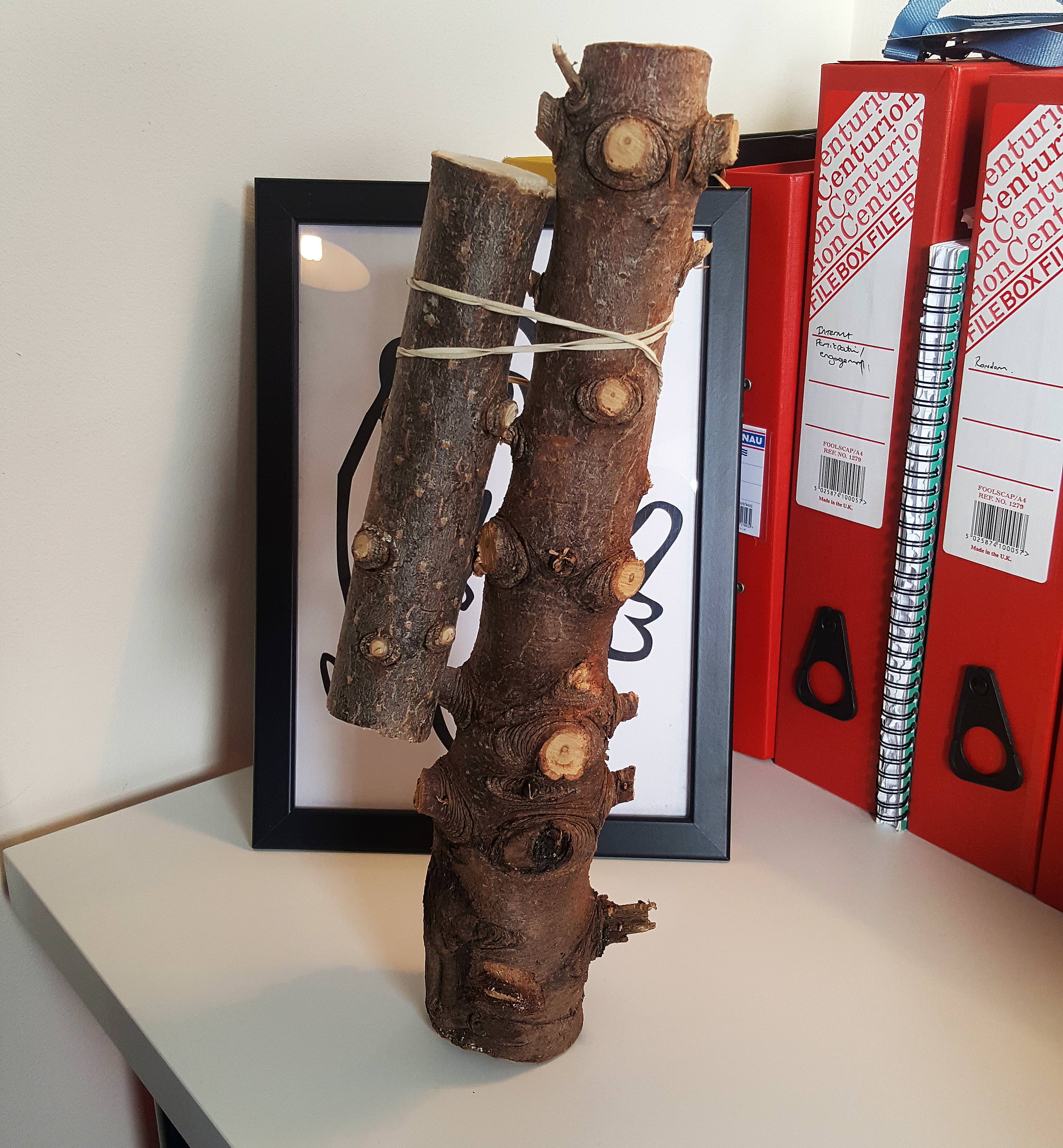 I let it dry out in my office over the year, basically like this. The smaller part of the tree didn’t get used for this build. Maybe I’ll find a use for it later on. 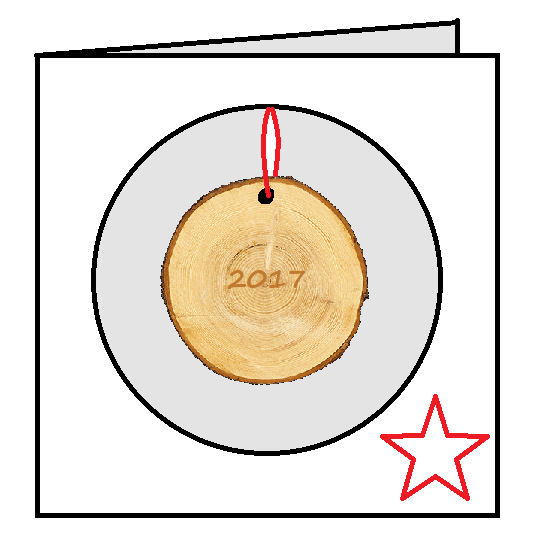 The design was rather simple. A card with a Christmas bauble attached that recipients can use to hang on their own tree. The idea came from my better-half’s (Jess) tree, where every year they find a bauble that symbolizes each particular year. They even have some from the 1950’s. Their tree isn’t just a Christmas Tree, it’s a display of history and memories. So I wanted to do something similar, but rather than keeping them for myself, I’d share them to all my family and friends too. The idea was that I’d cut the wood into slices, which can then be engraved and string attached that will allow the wooden slice to be held up. I’d attach the slice within the card with an open window, and attach it with some easily removable tape. The card design itself was left to Jess (who is much better at crafty things than me), and found some scandi-inspired stamps and the card itself online. 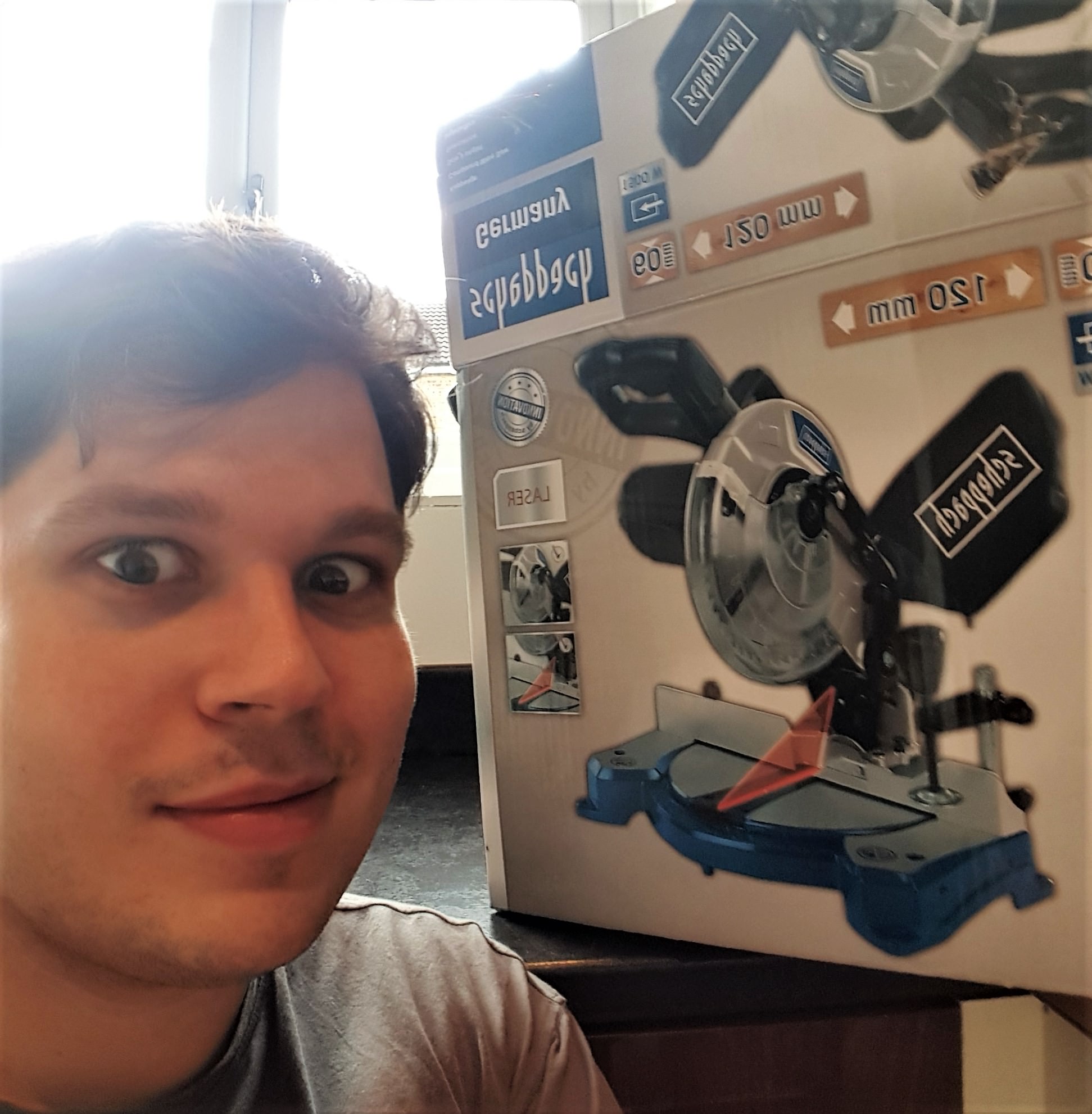 First off, Tools. I already had most of what I needed. A Dremel, sand paper, safety goggles, etc. But I’ve always wanted a Mitre saw. Something about big shiny spinning wheels of death. Actually, big shiny spinning wheels of death with frickin’ laser beams attached to their heads! Now normally my partner in crime informs me that that cannot be done. But in this instance the argument that I needed it for a Christmas activity, made purchasing laser beam wheels of death magically okay. But you might ask, why not use a saw and a jig to cut the slices? My response? Well, with that logic human’s wouldn’t have gone exploring outside the cave, cause you know, what’s wrong with THIS cave. 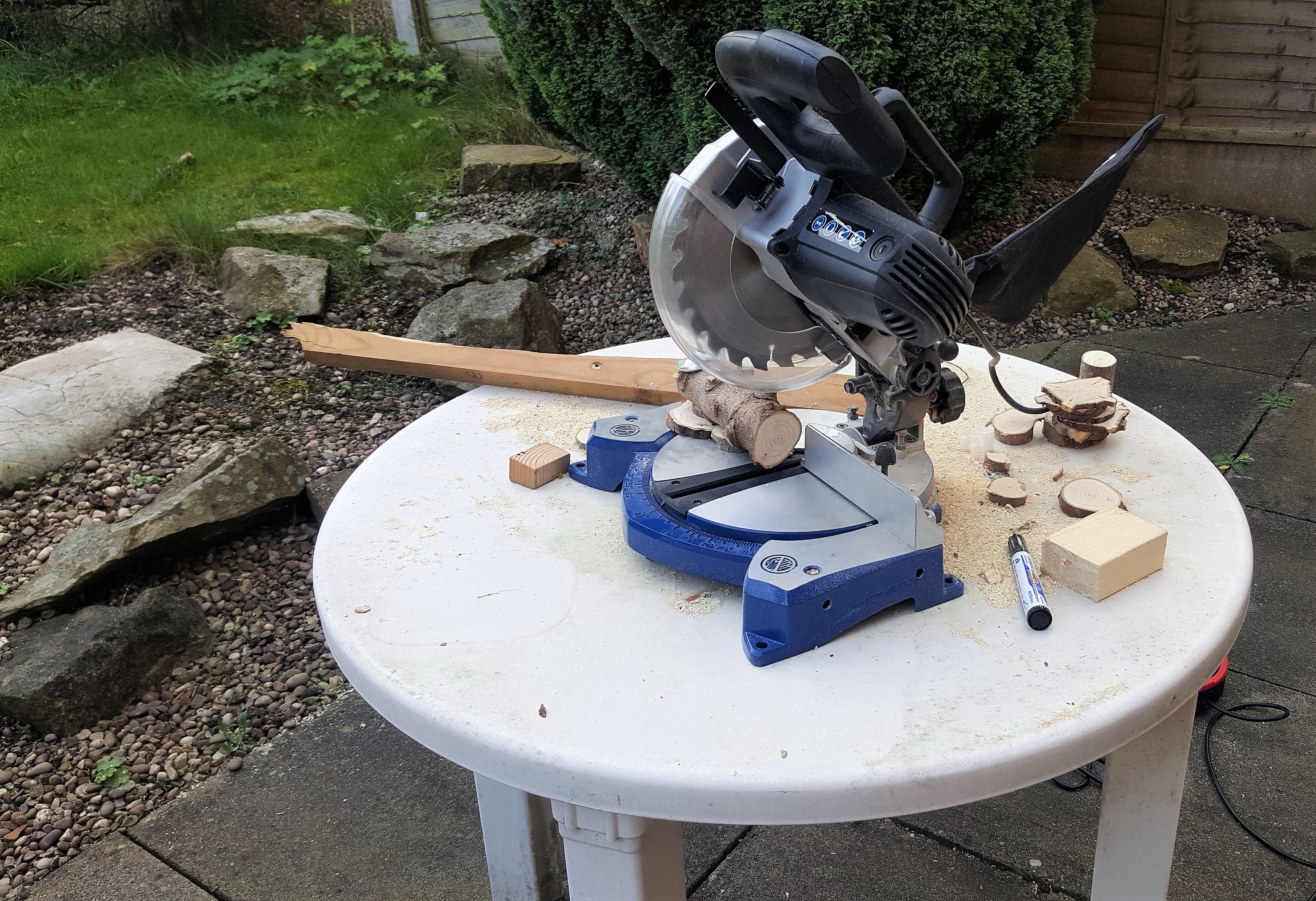 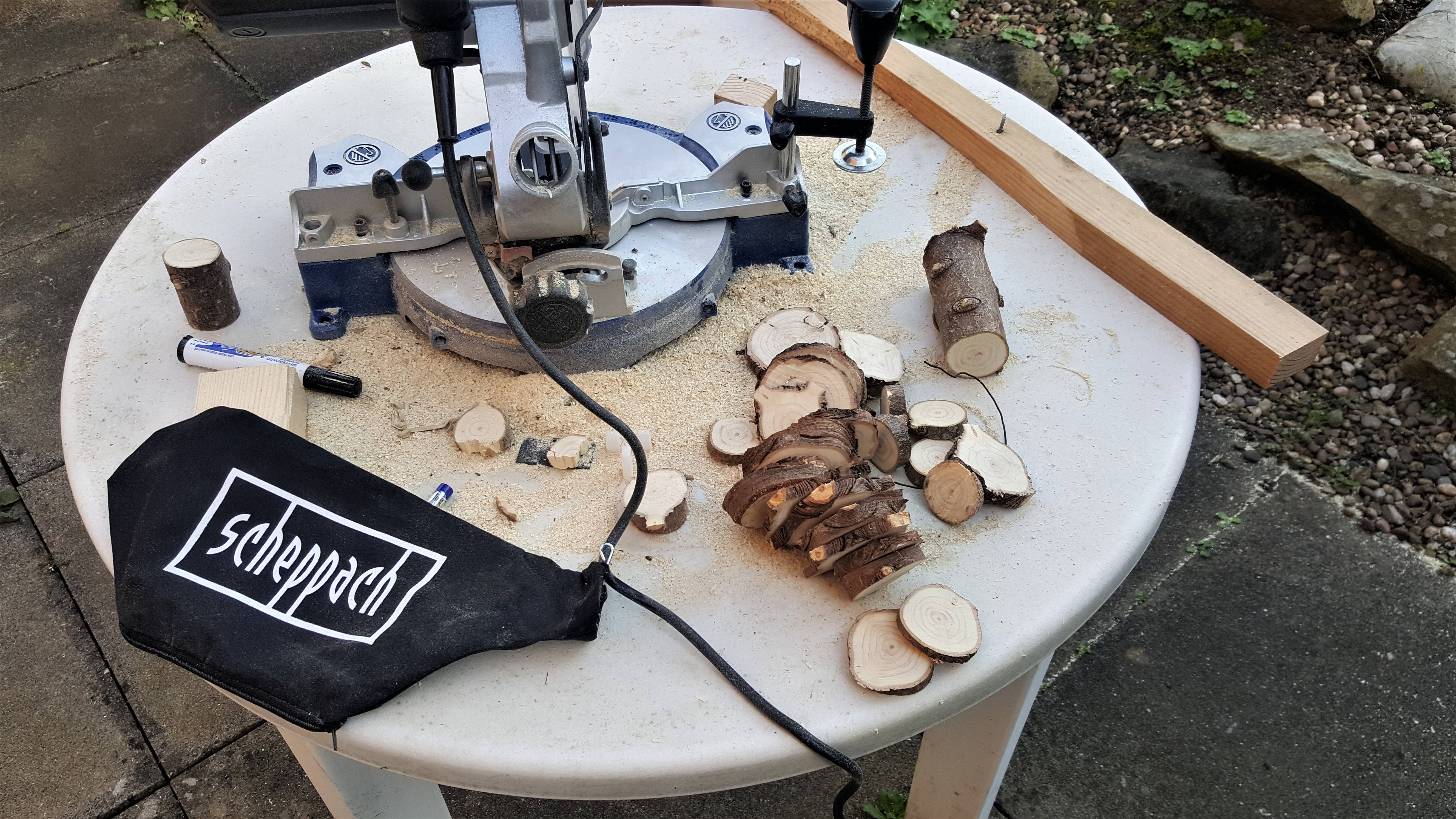 More sawing. I took this as I was checking how much the sawdust collection bag was actually collecting. I can confirm this particular model of saw’s collection bag collects the grand sum of jack shit. 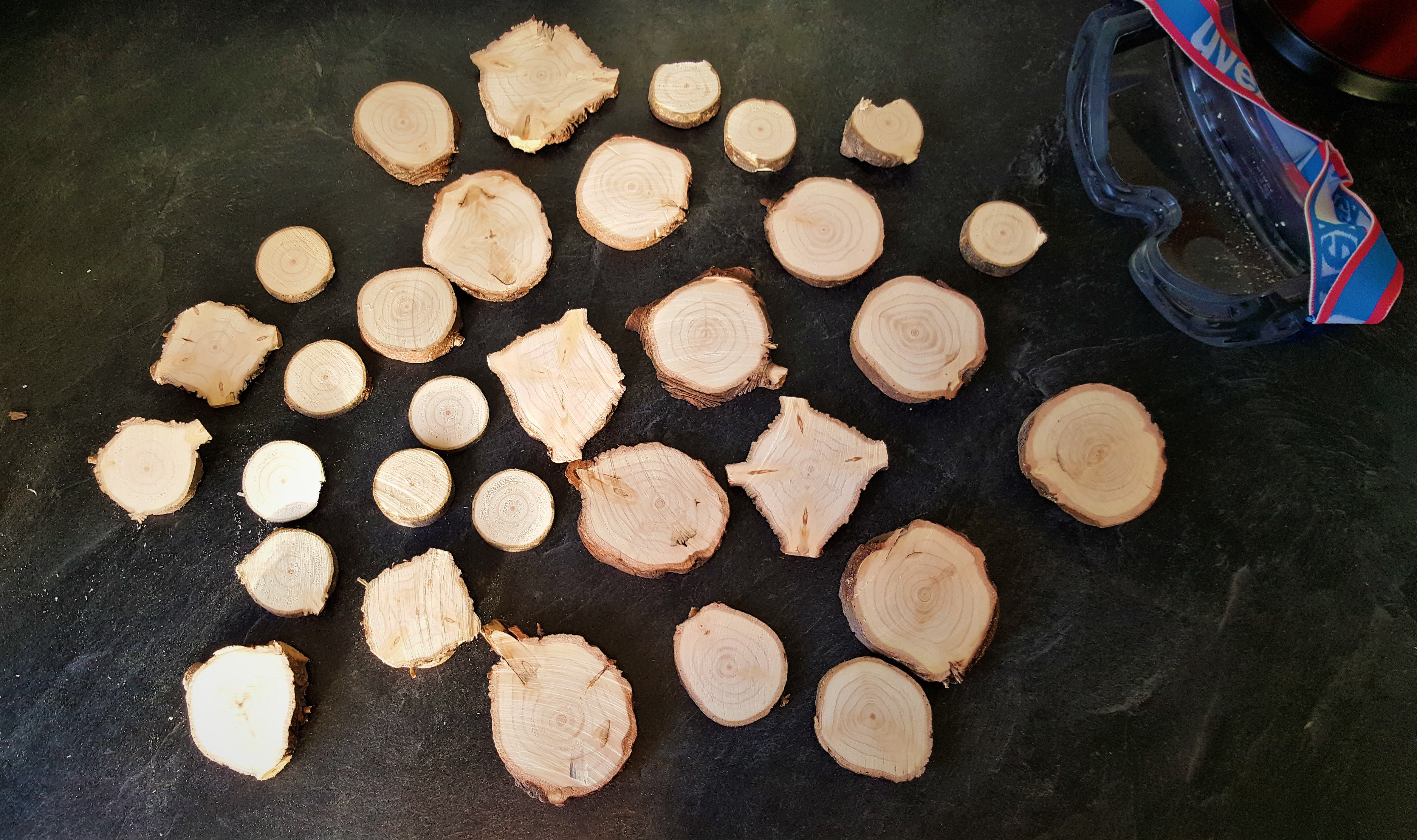 Some of the collected slices. I got the knack of it towards of the end in terms of reducing saw marks. However, no saw leaves a perfect surface. Which means…. 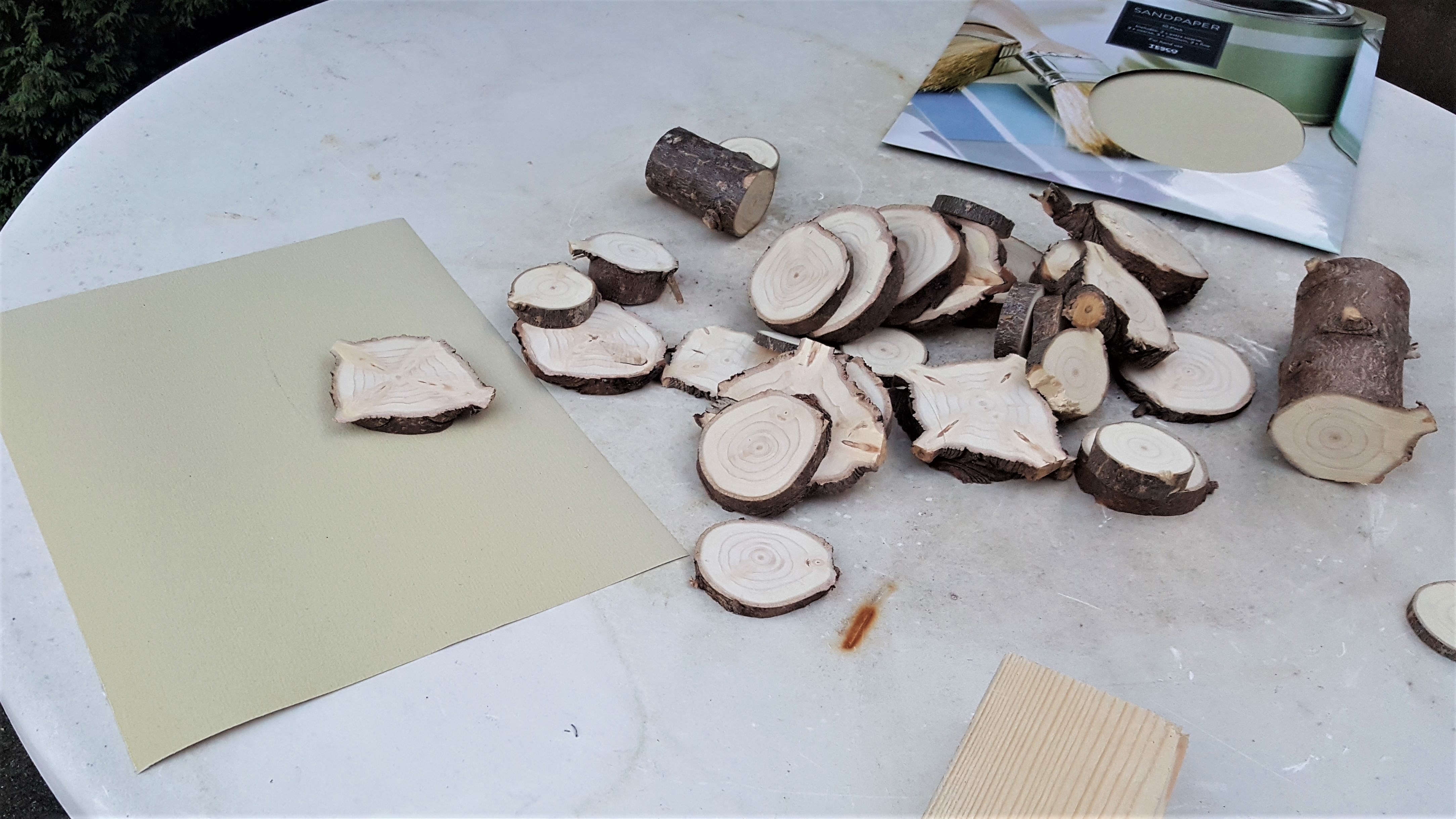 Sanding time. Lots, and lots, of sanding. Ever had to sand over 20 odd slices of wood on both sides before? Well on the grand scale of 0 to 10. With 0 being the Grinch and 10 being Saint Nick himself, I was at a solid 2 after getting these all done. You know what would have been perfect for sanding? A belt sander. I should buy a laser guided belt sander. 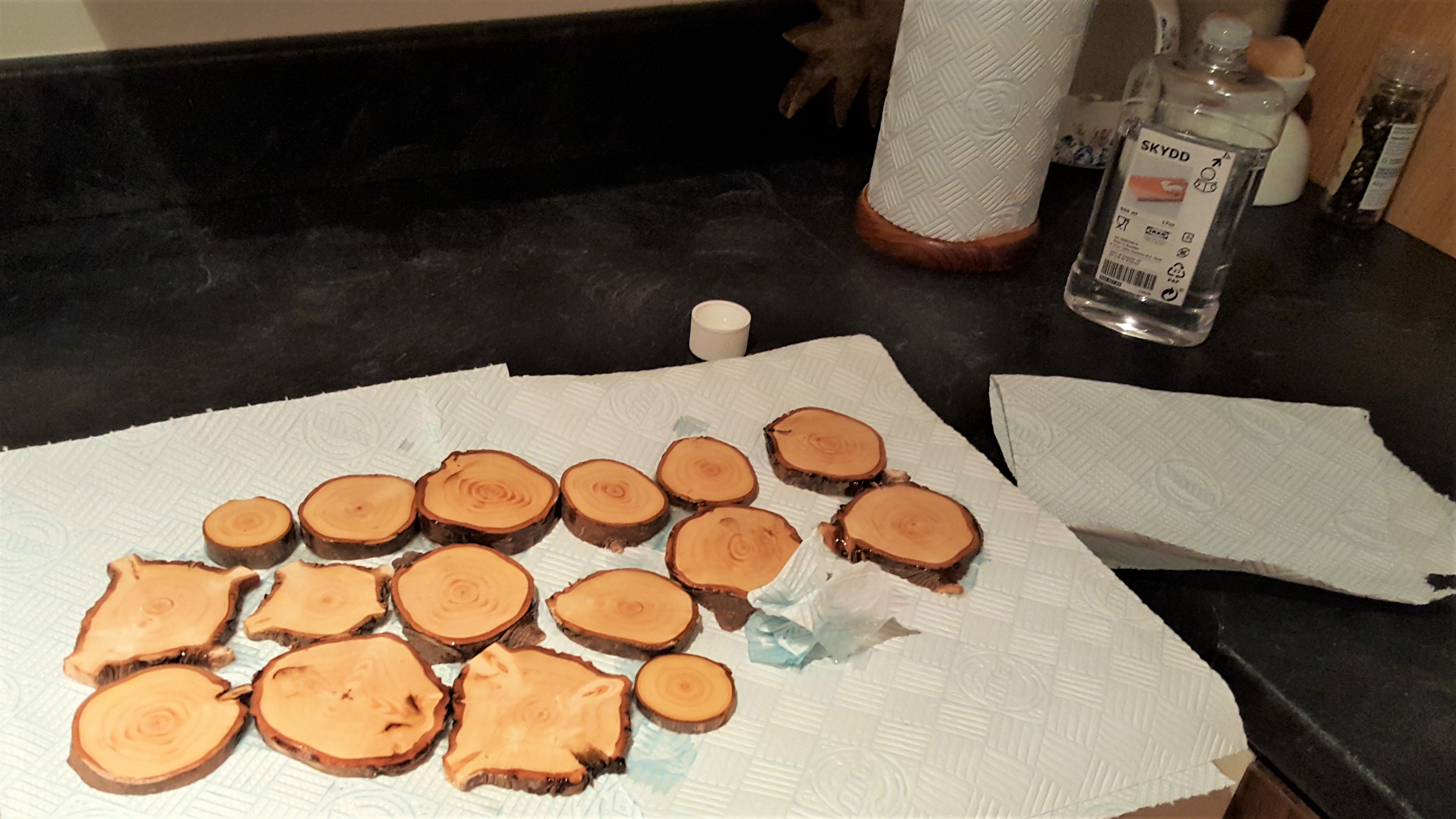 Then came finishing the wood. I used Mineral Oil. Firstly, because I already had it in and I was too lazy at this stage to go out and buy something else. But mostly because Mineral Oil was perfect for the task. I wanted to keep as much of the tree’s original natural look as possible. Also, I planned to give one of these cards to my sister whose child will be enjoying her first Christmas, so a non-toxic option was desirable should my niece think wood looks tasty. In the end it worked really well and bought out the beauty of the wood nicely. I soaked both sides of the wood with Mineral oil for five mins before rubbing off and leaving on some kitchen paper and left overnight. 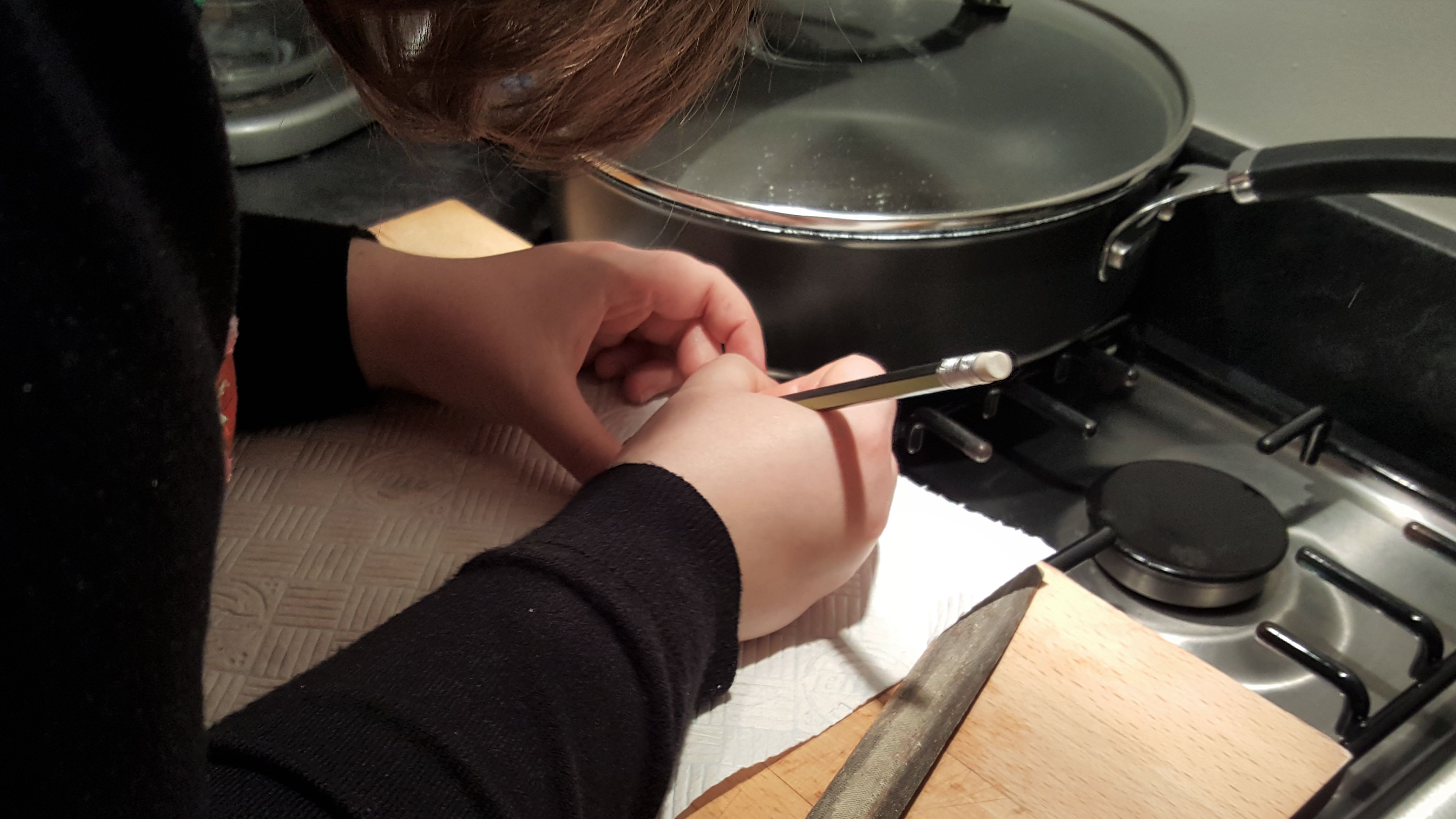 I thought it best to get Jess to write 2017 on the wood in pencil first before I engraved them. My handwriting has been carefully honed over the last 27 years to look worse than a toddlers. 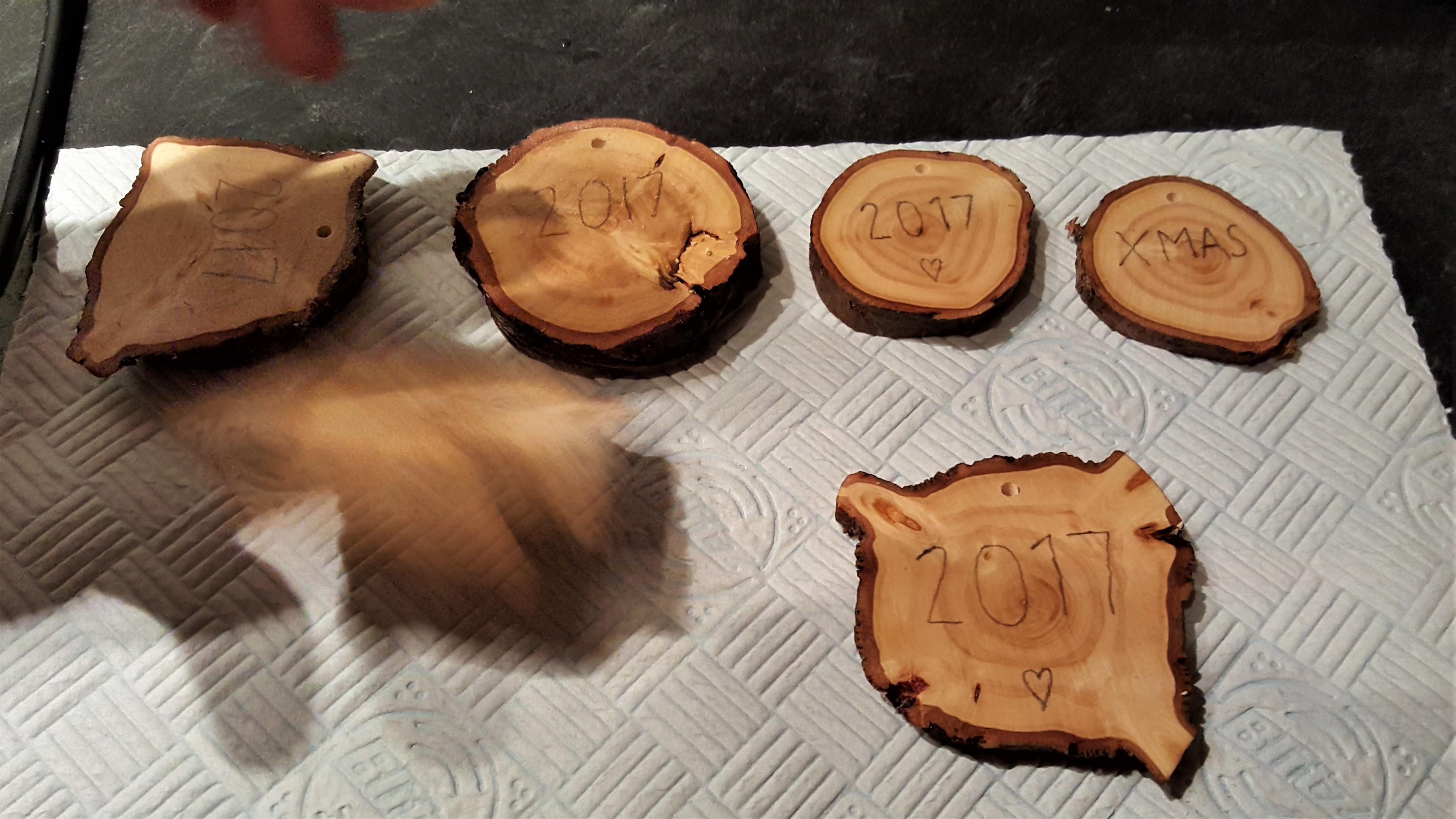 Ready for engraving, I’ve already drilled the holes in these ones. 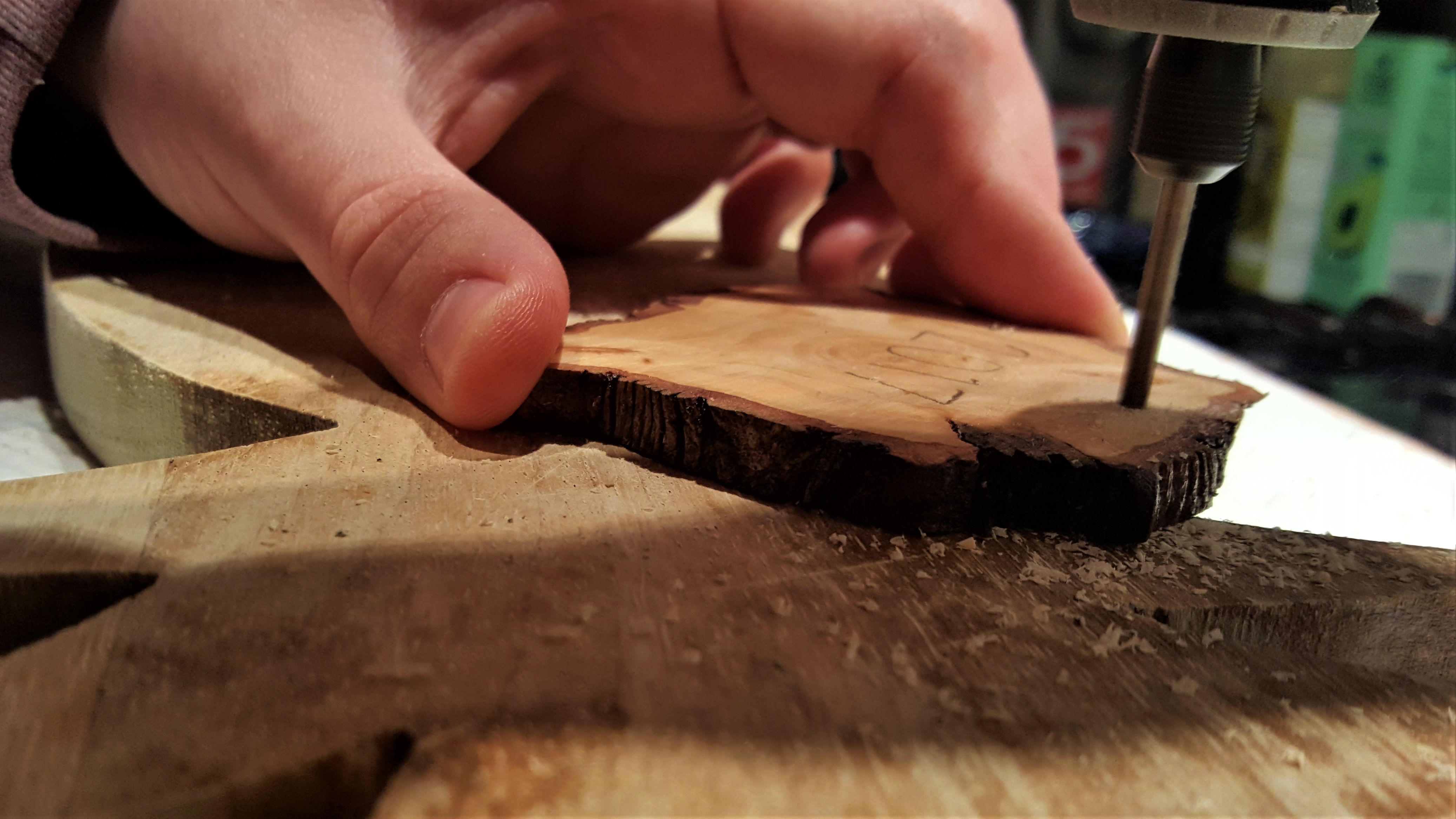 Drilling holes in the top. 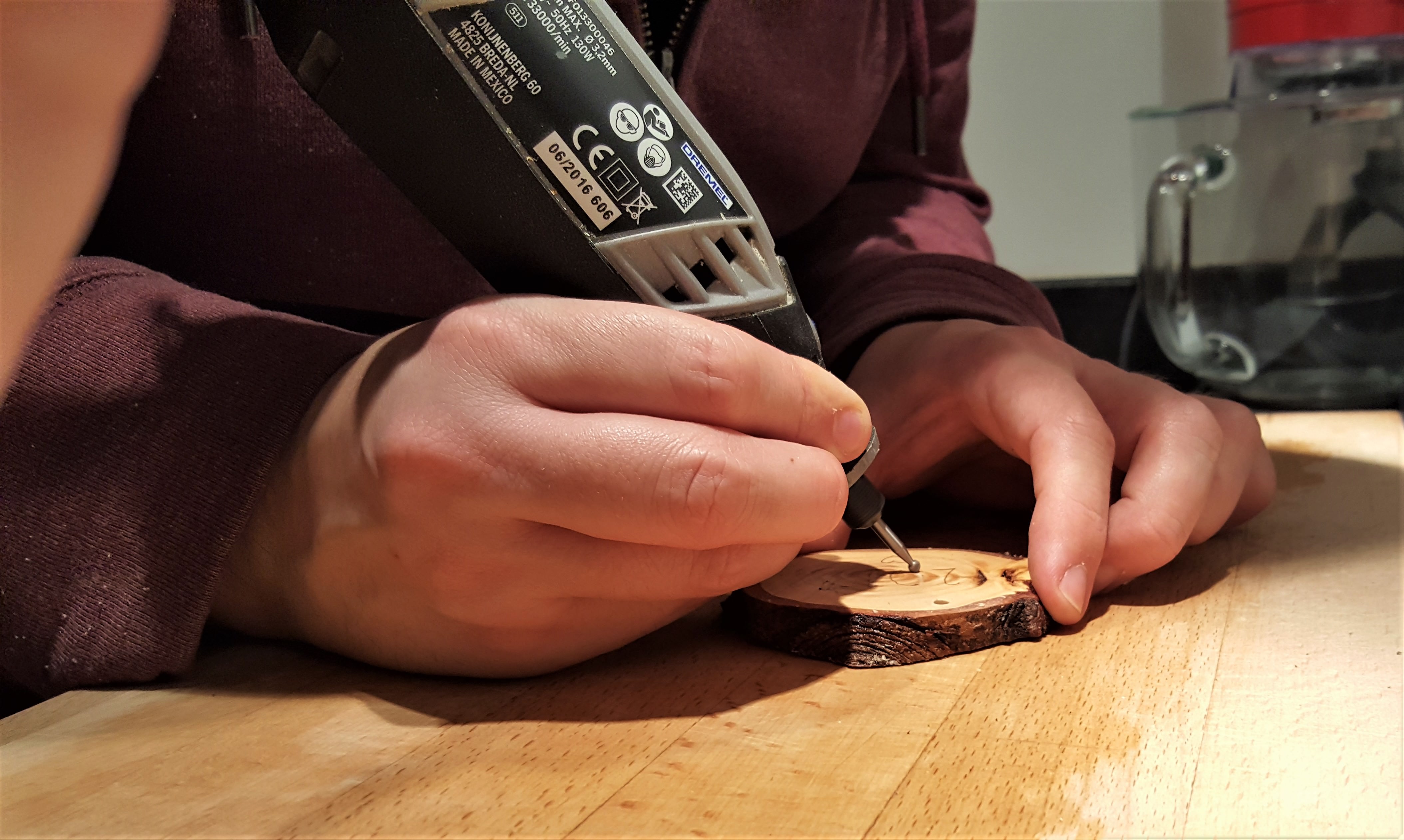 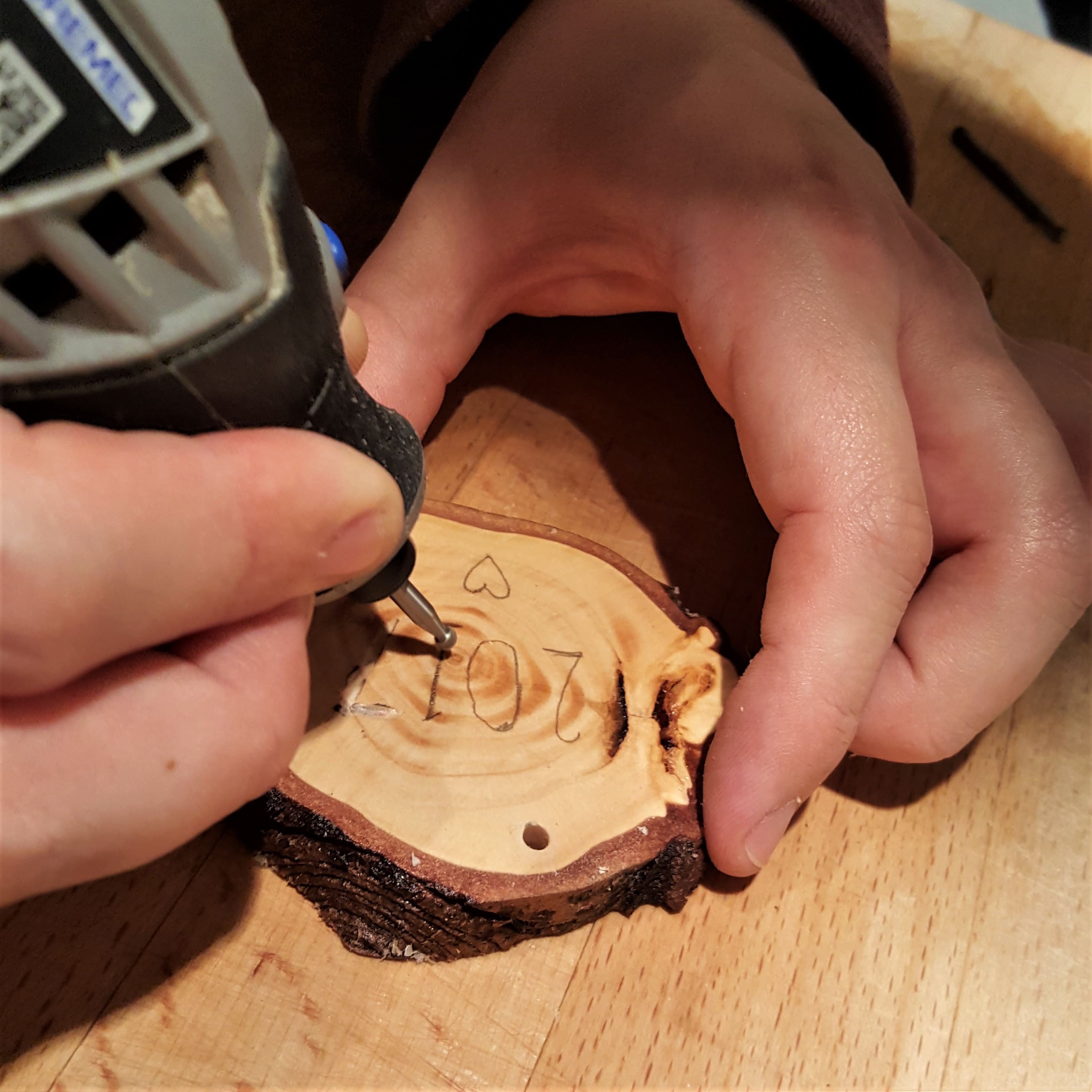 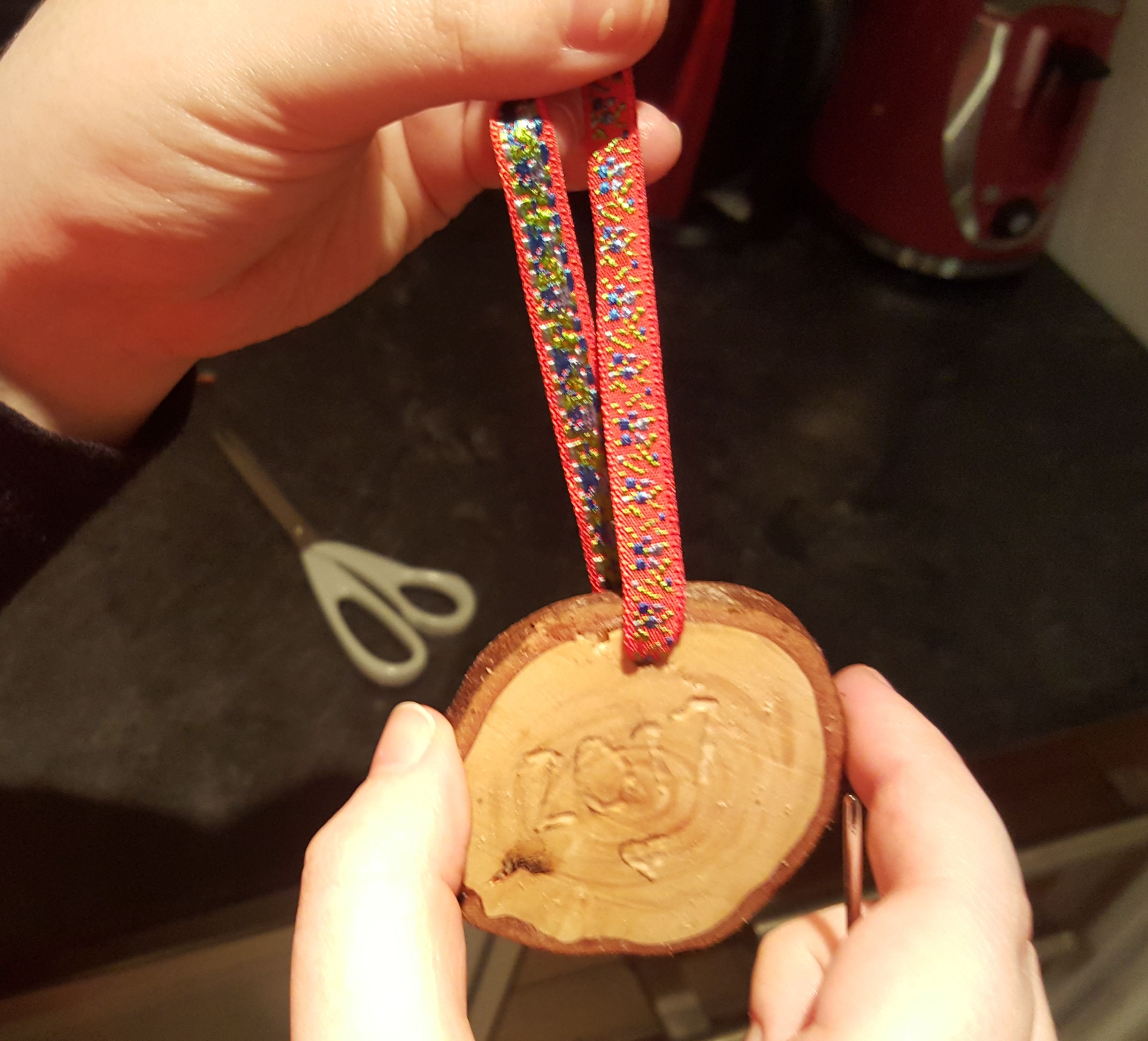 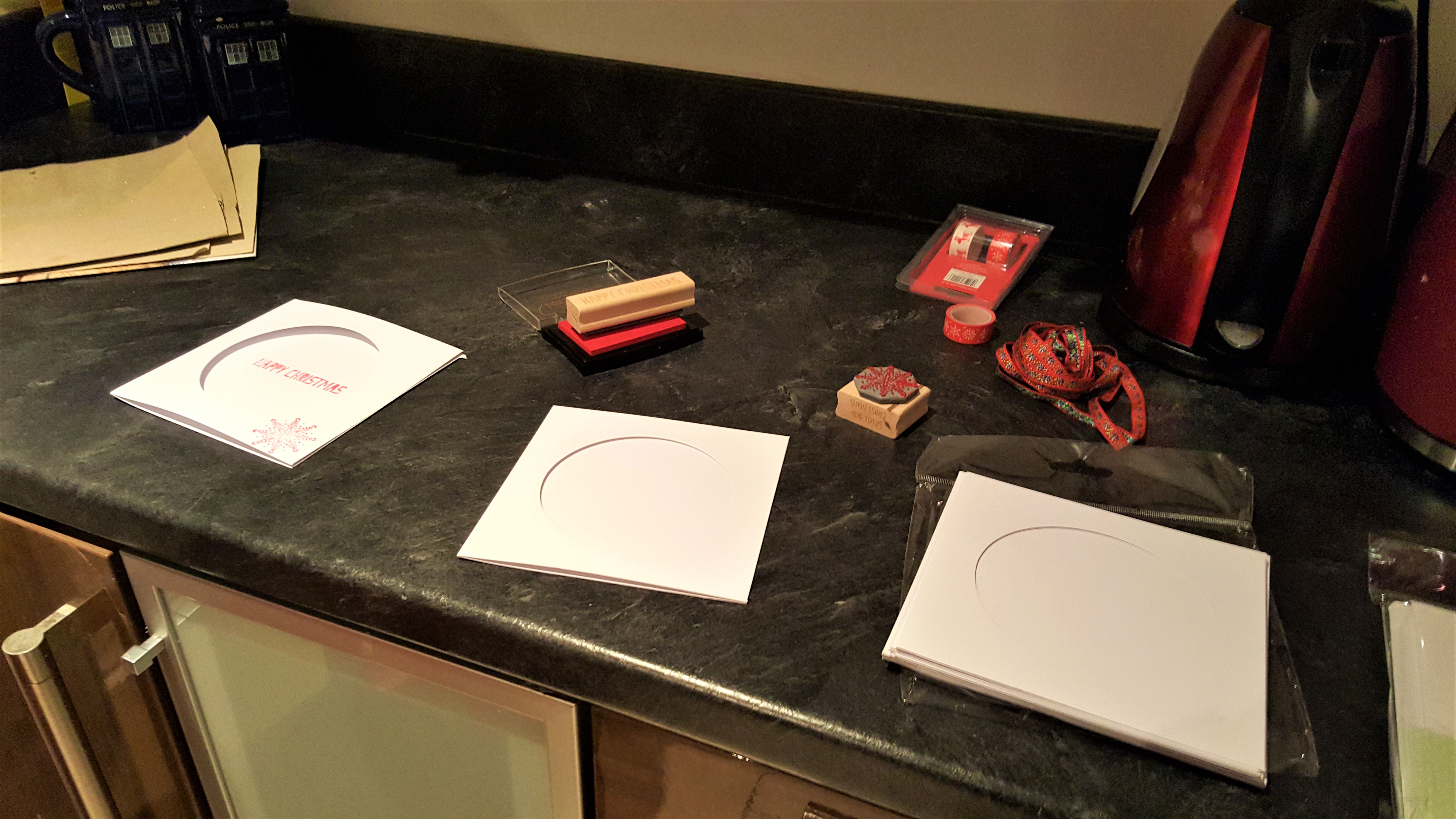 For the cards, we cheated a little bit, and found some cards with a pre-cut circular window that perfectly fitted our design. So we got them instead of making our own. We stamped the cards inside and out with red ink. I had to concede that I wouldn’t get a laser cutter this year. 🙁 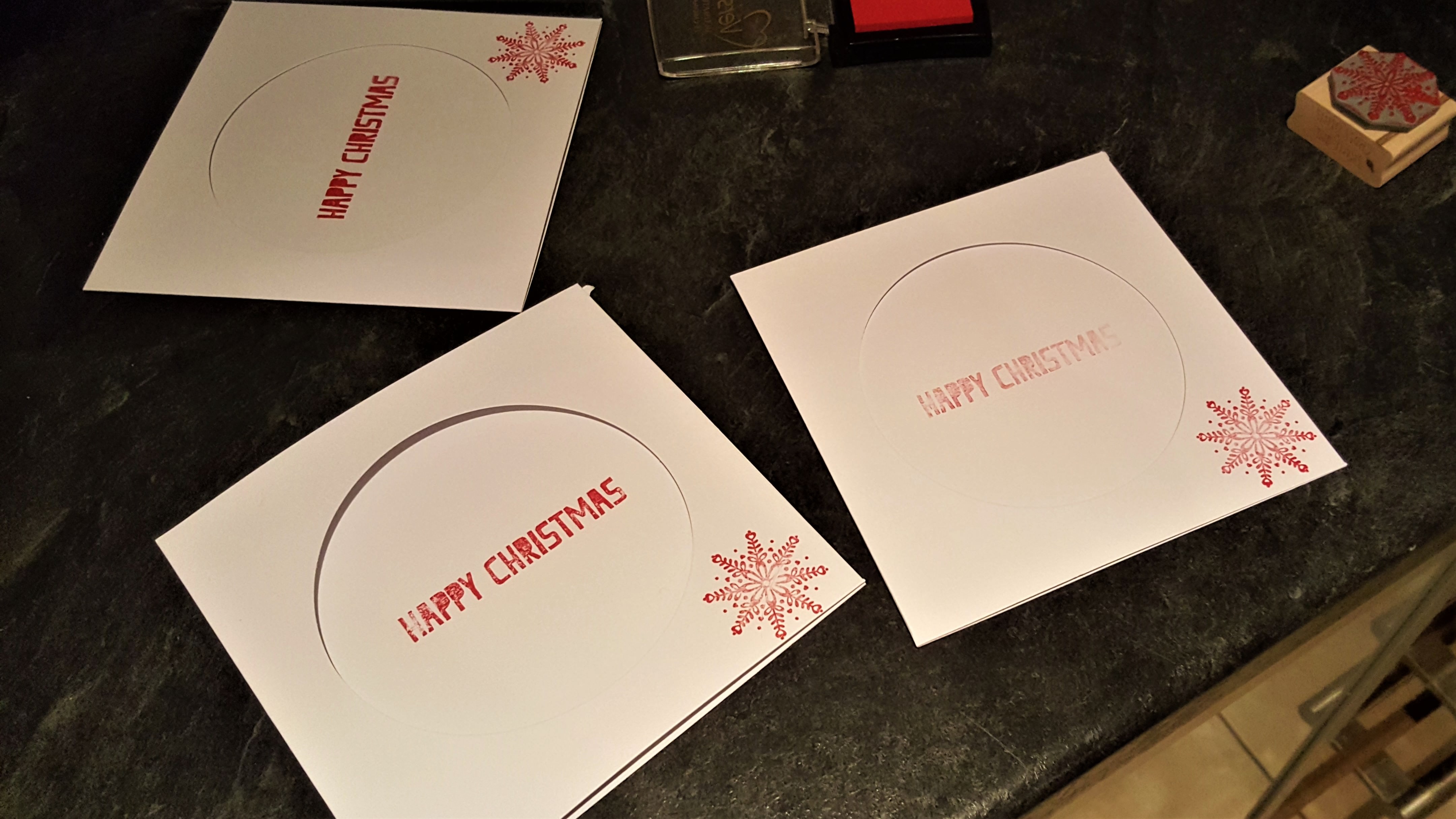 A few tester cards to see how hard we needed to stamp the cards. 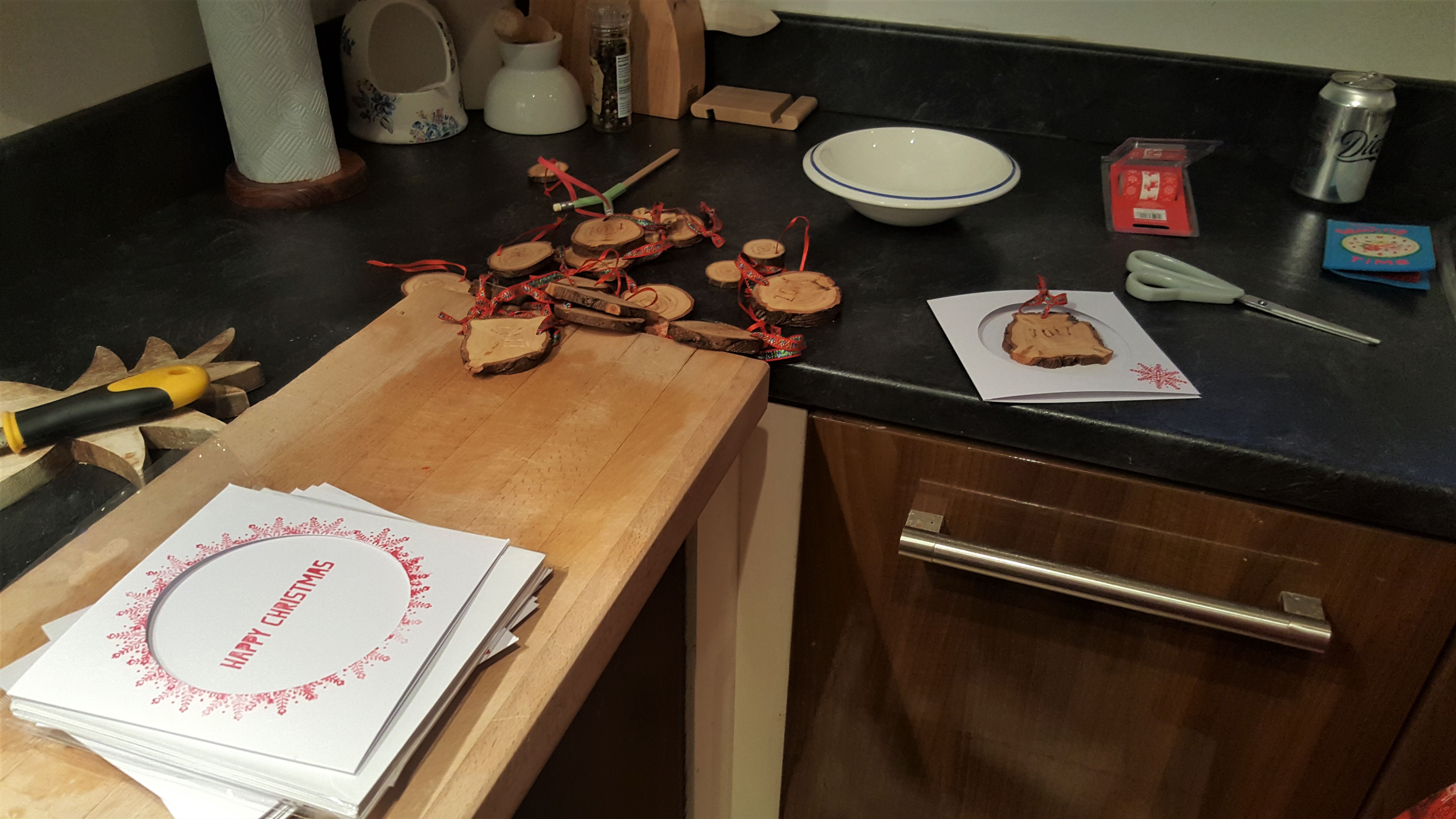 The finishing production line. We attached the slices onto the cards with Christmas themed washi tape, which allowed them to be removed without damaging the card itself. 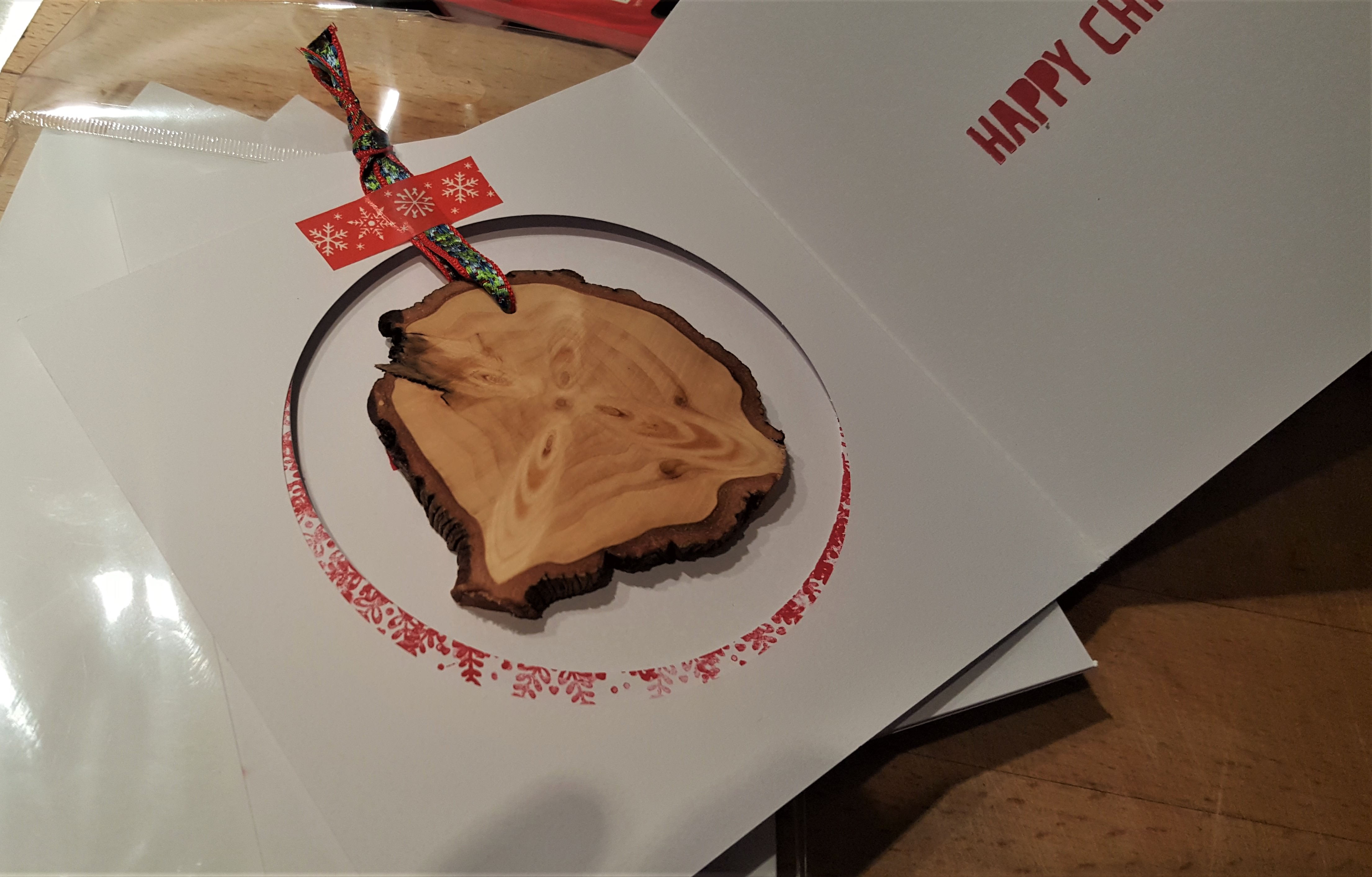 Inside the card. And they are done! 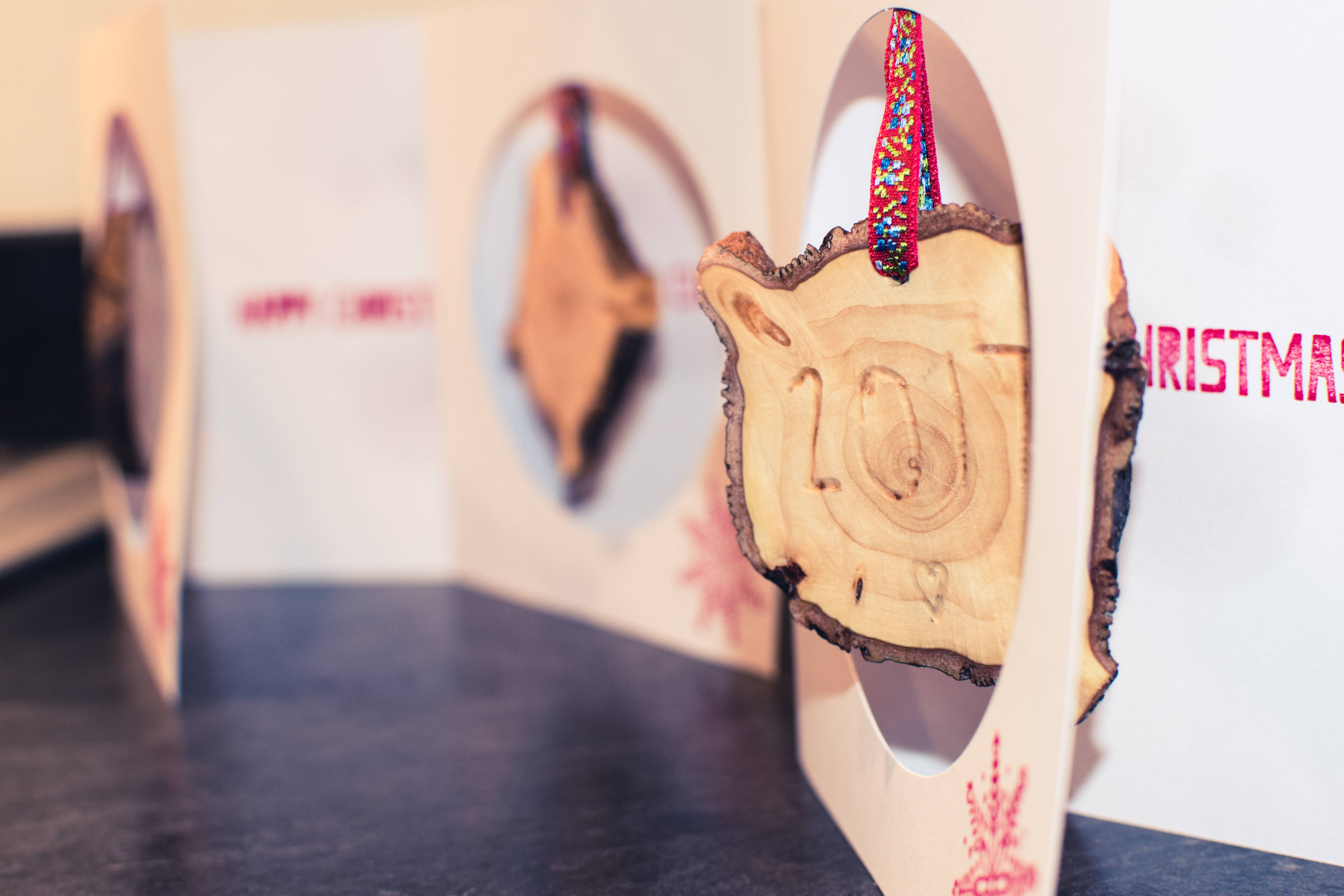 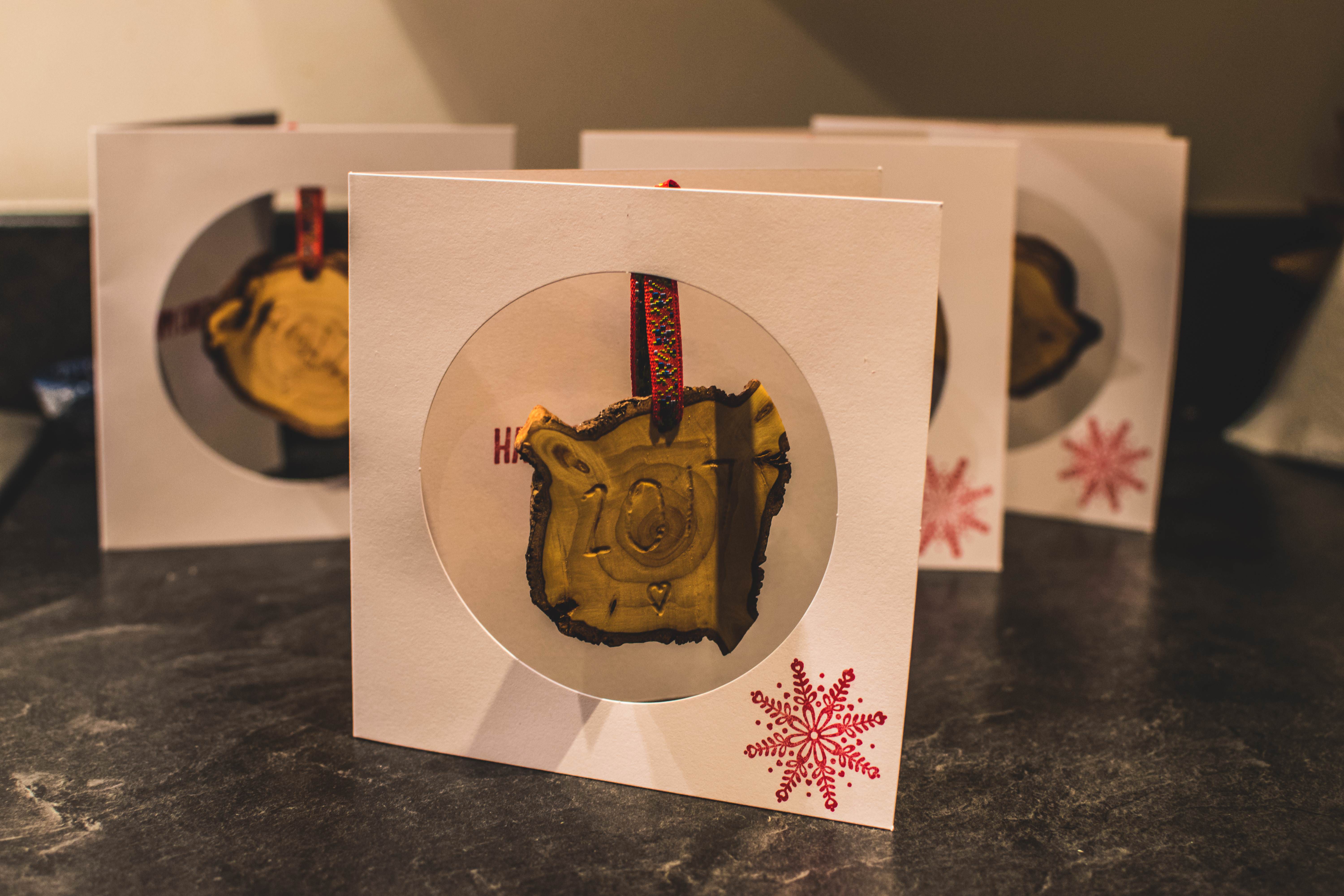 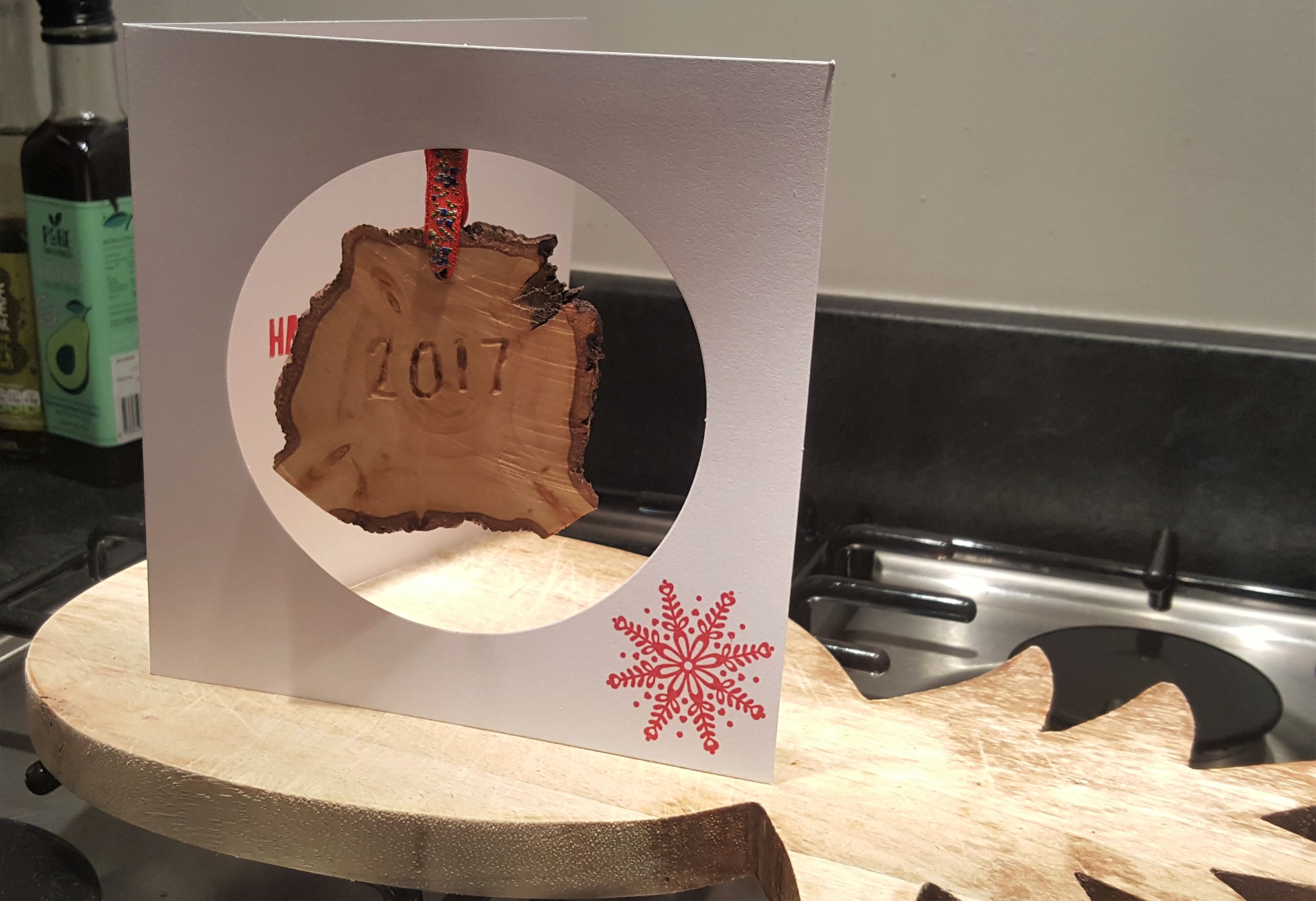 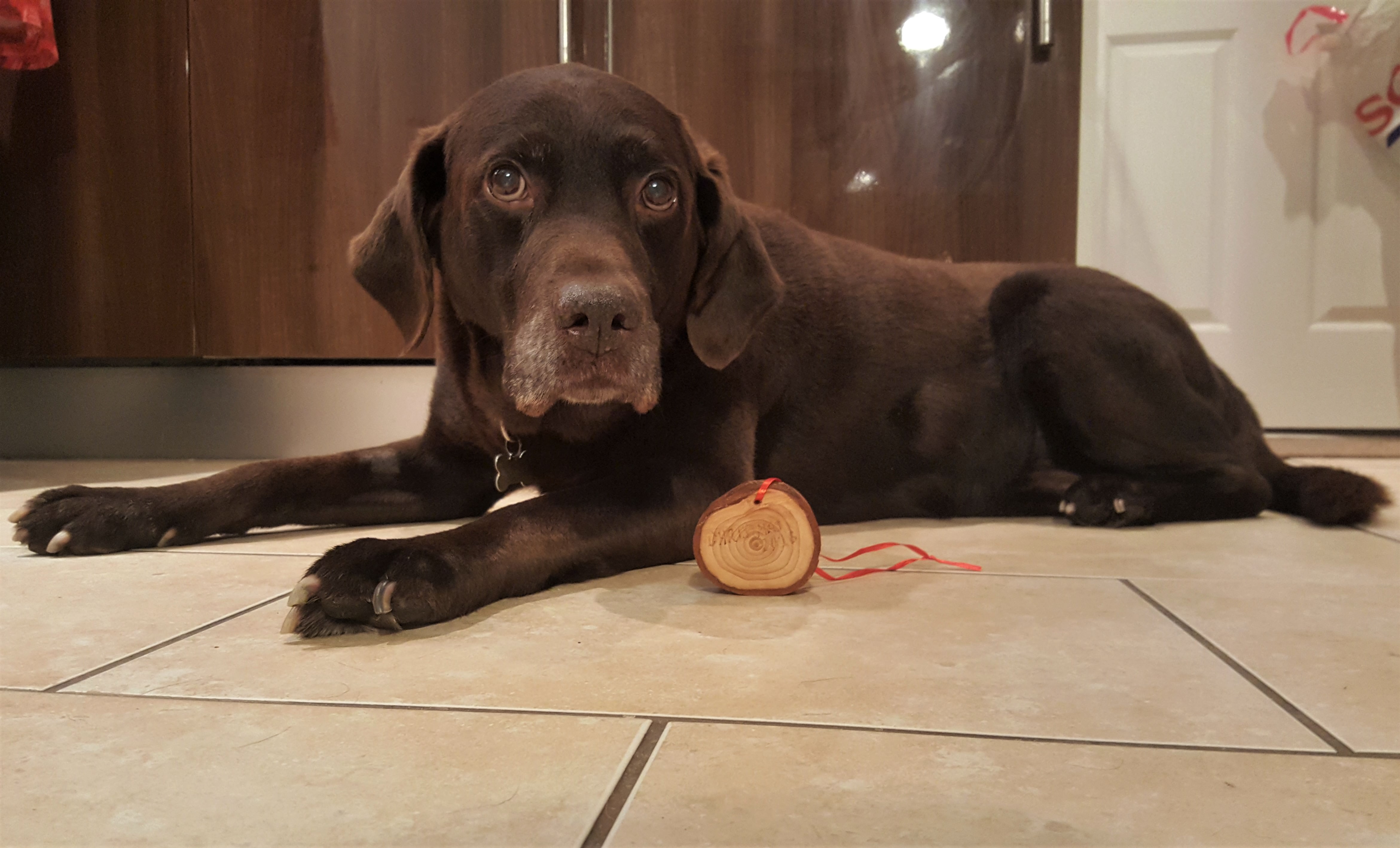 This website uses cookies to improve your experience while you navigate through the website. Out of these cookies, the cookies that are categorized as necessary are stored on your browser as they are essential for the working of basic functionalities of the website. We also use third-party cookies that help us analyze and understand how you use this website. These cookies will be stored in your browser only with your consent. You also have the option to opt-out of these cookies. But opting out of some of these cookies may have an effect on your browsing experience.
Necessary Always Enabled
Necessary cookies are absolutely essential for the website to function properly. This category only includes cookies that ensures basic functionalities and security features of the website. These cookies do not store any personal information.
Non-necessary
Analytics
Functional
Functional cookies help to perform certain functionalities like sharing the content of the website on social media platforms, collect feedbacks, and other third-party features.
Performance
Performance cookies are used to understand and analyze the key performance indexes of the website which helps in delivering a better user experience for the visitors.
Analytics
Analytical cookies are used to understand how visitors interact with the website. These cookies help provide information on metrics the number of visitors, bounce rate, traffic source, etc.
Advertisement
Advertisement cookies are used to provide visitors with relevant ads and marketing campaigns. These cookies track visitors across websites and collect information to provide customized ads.
Others
Other uncategorized cookies are those that are being analyzed and have not been classified into a category as yet.
SAVE & ACCEPT